The Will of the People (e- book) 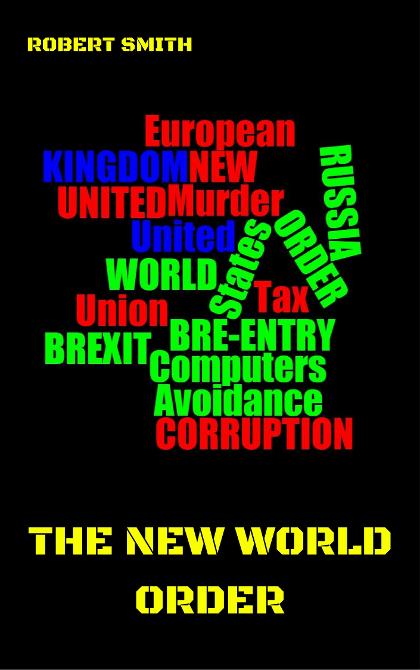 In 2015 my country voted to leave the European Union. A decision I strongly disagreed with then and one I disagree with more each day. Brexit brought into focus just how low my country had fallen not only in my eyes but in the eyes of the world and that was not something I wanted to see.

One of the joys of self-publishing a book is that you can write what you like. This book, initially published as 'The New World Order' and later retitled in e-book format as that phrase hated by so many of my fellow Remainers/Rejoiners 'The Will of the People.' The book is a self-indulgent, cathartic view that helped me to come to terms with a decision that I disagreed with so strongly. The book is more than that, it is a novel set fifteen years in the future that looks not only at the impact of Brexit but at how artificial intelligence can be used not only in manufacturing but in finance and services.

The book looks at how this power can be easily concentrated in the hands of the few at the expense of the majority and how, within a fictional concept, things might change.

The book, which I wrote back in 2016 was a reflection on how the twin evils of Brexit and Donald Trump would affect the world. Both Brexit and Trumpism were about isolationism and  maintaining the status quo by holding onto an almost mythical past distorted by years of faux nationalism and press opinion and distortion.

I had already dipped my toe into political fiction with the novel 'The Pastor, the Atheist, and the Unbeliever.' The New World Order is an attempt to see how we can have a better future and how we can best used technological advances to better mankind as a whole rather than the self-promoted 'elite' that our current form of capitalism seems to spawn.

Inspired by the stupidity of Brexit in the UK and the election of Donald Trump in the USA - The New World Order/ The Will of the People is a story of the near future that goes much deeper than the two twin follies. The novel commences in the near future where the ramifications of the twin political apocalypses of 2016, Brexit and the election of Donald Trump have left their mark, both on society and on the economies of those respective countries. Daniel Day, an Englishman who is forced to work overseas due to the declining British economy, visualizes an idea for a better world.He questions why democracy has failed so badly and sets out to develop “Modern Democracy,” a computer-based system that can manage a nation's economy using the Intuitive Technology available by the year 2027, a technology that can interact with voters in a manner not possible in the past. The system he designs understands the complex economies of countries in a way that politicians are failing to do and his system is designed to act in a predictive and logical manner driving economies forward.Securing backing from Jasper Sigurdsen of Icelandic IT, they set out to make this concept a reality. Trialled first in Iceland and then memorably introduced to Africa by Ruth Onwuatuegwa, the Modern Democracy system proves itself, gradually gaining adherents around the world. Africa is inspired by Ruth Onwuatuegwa and Masozi, daughter of the President of Namibia. Together with Melissa Sigurdsen, they market Modern Democracy, first in Africa and then throughout the world.The world's richest man is murdered while playing golf, and the uber-rich start to question their financial dominance. This leads to a further development; “Modern Capitalism” inspired by Marcus Delavane, a partner in that infamous game of golf, who questions his wealth and the purpose of his existence, and adds his financial software to that of Modern Democracy.The result is Modern Capitalism, an assault on the “three evils” of capitalism; tax avoidance, tax evasion, and corruption. Amidst all this; Vladimir Putin dies and the “Great Revolution” takes place within Russia, America fails to recognize change at a political level, South-East Asia takes a long hard look at itself, and Great Britain re-joins the European Union after being a pariah for many years.The Courtney Black trial, the lady who hit the world's richest man, William DeVine in the back of the head with her sand iron, inadvertently starts the “Burn the Boats” campaign where the yachts of the mega-rich are set alight while docked in port. The expanding wealth gap is exposed as never before.As the world wakes up to the disparity in wealth, not only between rich and poor, but between the mega-rich and the richest people in the world there is an opportunity to restructure the world in a fairer way. It is an opportunity that Marcus Delavane takes.60,000 increasingly fast-paced words that involve live conversations, the media via live streaming, talk shows, presentations, and discussions as the story moves around the world to its inevitable conclusion; The New World Order, but not the one of the conspiracy theorists. 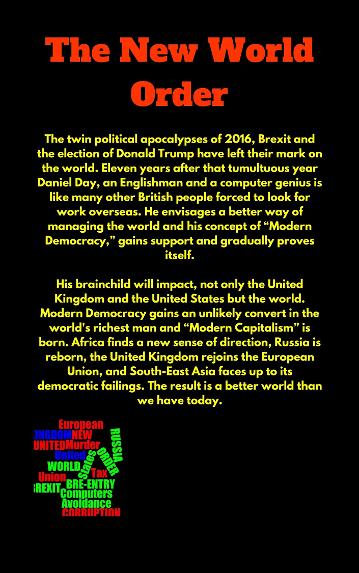 To indulge myself more the book is written in a very staccato fashion with short conversations that is different from my more traditional offerings.

Whereas in this book I try in a fictional format to put the world of politics to right I have tried in my book '2022; The Return of the Annunaki' to highlight both the political and environmental issues facing the world.

It was a book that came very close to being conventionally published eventually gaining the accolade: "Hugely entertaining, but not for us."